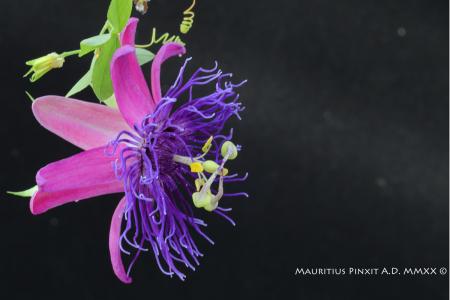 The origin of the name dates back to 2012, when I was invited to Monopoli, Vivai Capitanio, for a presentation on the occasion of the 'FOURTH NATIONAL MEDITERRANEAN NURSERY DAY. COLOUR IN THE GARDEN'. As part of this event there was also the awarding of prizes dedicated to Stefano Capitanio, owner of the nursery who had died suddenly a few years earlier.

I gave my presentation entitled 'The Passiflora Genus: species and hybrids suitable for the Mediterranean climate'. At the end of the event I was asked to dedicate a hybrid to Stefano Capitanio. I kept my promise shortly after when a cross-breed of mine opened its first flower.

Passiflora 'Stefano Capitanio' is one of my most beautiful hybrids. The size of the flower, its shape enriched by a large and showy crown made of wavy and curly filaments of deep purple and the magenta with a touch of cyan of the corolla are an authentic spectacle.

The father (P. edmundoi) introduced the magenta colour to the petals and sepals and, compared with P. ' Fata Confetto', reduced the number of alternating white and violet bands in the filaments. The latter have remained, at times with barely a hint, only in the centre of the flower and their numbers vary, even on flowers of the same specimen.

I investigated this variability and was told by a friend of mine, a renowned molecular biologist and geneticist, that the expression of pigments in flowers is modulated, among others and within certain limits, by temperature: cold increases them and heat decreases them. This explains the presence of different flowers on both different specimens and on the same specimen. There are blooms with a completely white centre of the crown and a lighter corolla. Certainly these have flourished in warmer climatic zones and/or seasons, and perhaps substrates with different pH values have been used. In the flowering specimens in my collection, the centre of the flower is darker in late summer and when night temperatures drop below 20°C. The pH of my substrate is subacid.

Another identical hybrid is sold under a different name, sometimes with the centre of the flower lighter or completely white. I believe it is always the P. 'Stefano Capitanio' which flowered in warmer seasons/climatic situations.

However, we also accept the different name when this bloom is characterized by a particularly white crown in the centre and with a greater number of alternating bands. I am referring to P. 'Pandora' (2013, the following year) that I published on this website.

However, I repeat that, in my opinion, it is the same cross-breed subject to the variability that I have explained. This was also confirmed by a molecular analysis on different specimens, with different blooms and times, and the exact same genetic code resulted.

On several occasions, I have created hybrids using P. ‘Fata Confetto’ x P. edmundoi and there have been no others similar to P. 'Stefano Capitanio'. You can see here the P. 'Fata del Mare', unfortunately extinct, and the more recent P. 'Fata Violetta'. As was explained to me, it would be impossible for the cross-breed, obtained from four species, to have resulted in such similar flowers, precisely because of the complexity of the cross-breeding itself in which thousands of genes are always mixed in a different and unpredictable way.

Some images defined P. 'Pandora' published on social networks, on Facebook groups and characterised by the centre of the flower darker or violet and the crown with a limited number of white bands, are not P. 'Pandora' but P. 'Stefano Capitanio '.

Even with the above clarifications, under the name of P. ' Pandora' I can accept only flowers that have a completely white centre and a higher number of alternating bands and such as exceeding almost half the length of the filaments.

The mother of P. 'Stefano Capitanio', P. ' Fata Confetto', is one of the hardiest passifloras that exists. Its vitality at low temperatures comes from two of the parents: P. incarnata and P. tucumanensis, both sucker-producing.

P. cincinnata did not actually reduce this fridge resistance, far from it. On the other hand, P. cincinnata  itself lives in a very vast range that goes from Argentina to the more properly equatorial areas. We know that there are tropical species that have acquired and encoded fridge-resistance in their genetic code during the ice ages of our planet. This property has remained even in the very slow variation of the climate up to the current tropical one.

P. ' Stefano Capitanio' is generous in its flowering, truly spectacular.