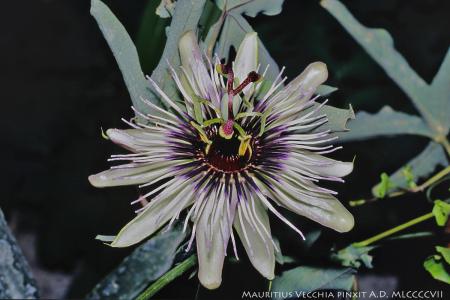 Star of Cremona. Dedicated to my city: Cremona.

The first flower opened in June 1997. I had pollinated P. x violacea with P. caerulea 'Constance Eliott'. A very particular flower emerged with a contrasting crown inside: an almost black heart immersed in a slightly pinkish white. A spectacle, also due to its considerable size similar to those of 'Constance Eliott'.

The name chosen was P. 'Stella di Cremona'. Inspired by those of John Vanderplank's hybrids that he had dedicated to his cities (P. ‘Star of Clevedon’, P. ‘Star of Kingston’, P. ‘Star of Bristol’), as a good Cremonese, I too wanted to dedicate the my first hybrid to my city.

The plant was robust, lively in growth, inoxidisable and unsparingly floriferous.

I was at the beginning of my adventure with this fantasy world and I was experimenting with various cultivation techniques.

One of these worked well, on the surface. In spring I buried the pots with the passifloras. The roots found a way to grow in the open ground and the specimens were lush. Only too late did I notice that they had fallen ill with nematodes of the genus Meloidogyne. The roots were infested with them, filled with galls and tubercles, and the less resistant plants were lost.

Among them also the P. 'Stella di Cremona'. When I became aware, I tried to multiply it by cutting, but it was a failure.

I summoned two luminary friends of mine to my house: a university professor with his assistant, who brought me a specialist from Modena, an expert in phytopathology.

We were all four seated around the pot of the dying P. 'Stella di Cremona, with a funereal air, silent and lost. The technician pulled a mysterious vial containing a dark liquid out of a briefcase. Acting like a doctor I begin to slowly pour drops of this medicine into the soil of the pot. A powerful nematicide for sure, I thought.

A little at a time the poison was poured into the pot. Only then did we all get up and, with sadness in our eyes, we looked at this first hybrid of mine for the last time. The luminaries left. The technician from Modena spread his arms and hastened to reiterate that he could not guarantee the success of the therapy. The root system was damaged and full of nodules. Even the collar of the plant was now dry.

The day after the P. 'Stella di Cremona' was extinct.