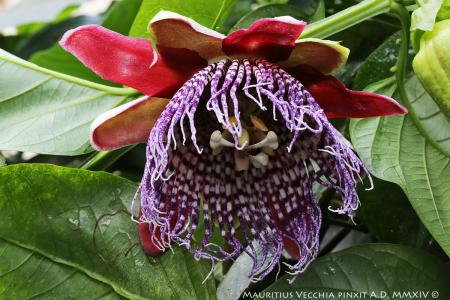 Dedicated to the Belgian botanist and agronomist Joseph Decaisne (1807-1882) who worked in Paris at the Natural History Museum where he described numerous plants and was also director of the Jardin des Plants, Paris.

In Europe, this plant is more often known by the incorrect name P. quadrangularis; in fact, the true P. quadrangularis, a botanical species, is less widespread and also quite different. This hybrid acquired the size of its leaves and flowers from P. quadrangularis. However, the intense colours of its flowers and, in particular, the large corona, come from P. alata.

It has a monumental stature, making it one of the largest passionflowers in existence. At the same time, it is also one of the easiest to grow and is a source of great satisfaction, especially for beginners.

The flowering of this hybrid leaves anyone who comes close to it amazed and incredulous. The flowers do not seem real, they are so complex and perfect, almost the result of an artist's vivid imagination.

Some time ago, I tried putting some of them on the counter in my pharmacy and many customers, deeply amazed, touched them to make sure they were real.

Certainly, this flower's large, rich corona, characterised by perfect alternating bands of white and purple, may seem far-fetched, but nature often has resources that we cannot even imagine.

The flowers, with a robust and fleshy consistency, exceed 13 cm in diameter. The slightly retroflexed petals and sepals are dark crimson. The corona is composed of dense filaments of the same colour as the corolla, with white concentric bands, denser at the centre of the flower than at the periphery. The apices of the filaments curl and, as they become thinner, fade to white.

The leaves, which are whole, have an ovate shape with a sharp apex. Two pairs of glands are situated on their petiole. The stems have the characteristic square cross-section, with slightly protruding wings, very similar to that of the parents.

P. x decaisneana tolerates temperatures close to zero, meaning that it can be placed outdoors in many Italian coastal locations. Only prolonged and intense frosts will irreversibly damage it.

This plant will bloom abundantly in a pot, as long as you are careful to use containers of an appropriate size (30-35 cm at least) and fertile, rich soil. The supports must also be at least 1.5 m high. Under ideal conditions, P. x decaisneana will push out its shoots for a few metres, continuously producing buds at the nodes.

Propagation is done with cuttings.