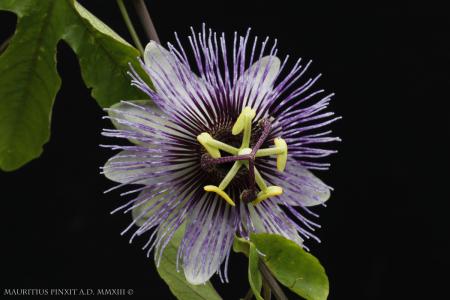 Debby is a girl's nickname.

Years ago, in the German quarterly magazine 'Passiflorunde', there was always an article dedicated to the new hybrids by Leopold Ševcík, one of the most prolific hybridisers ever.

He produced numerous amazing hybrids, many of which were obtained by using other hybrids as parents of new plants.

In such cases, many variations were created and the seeds removed from their fruit will easily produce plants with varying characteristics. In other words, forms or 'clones' are obtained that have common parents but different characteristics.

P. 'Debby' is one of these, since from the same batch of seeds Leopold Ševcík published 'clone 2' under this name, while he gave 'clone 4' the name P. 'Viola'.

P. 'Debby' is a plant with a rich and incessant flowering. It produces flowers with a corolla (sepals and petals) of a colour and shape very similar to that of P. caerulea.

Above this lies a brightly coloured corona. The centre is dark, almost black, up to almost halfway, then suddenly lightens to a very warm lilac, in which light paler concentric bands are hinted at. The corona has very similar colours to those of the species that Ševcík erroneously called P. porphyretica, being rather a plant similar to P. oerstedii.

Placed next to each other, the two flowers could be confused were it not for the shape of the latter, which has strongly retroflexed petals and sepals.

P. 'Debby' was also common among European collectors because it spread so easily, thanks to its cuttings, the only possible propagation method, rooting with great ease.

This beautiful passionflower is presumably less hardy. In winter, it must be kept in areas with a minimum temperature of more than 5°C.