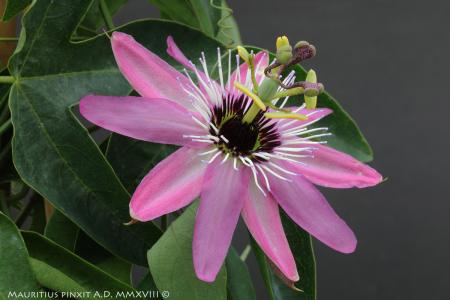 Designation attributed to the violet colour of the flowers.

P. x violacea is the oldest documented hybrid, a truly historical hybrid. This explains the existence of its many synonyms and also the numerous disputes over its publication.

The material author of the hybrid was a certain Mr Milne, who produced it in 1819. The first description was written and published by J. Sabine in 1821. This work was not accepted because, according to the rules in force at the time, the name P. caeruleo-racemosa was incorrect. Subsequently (1824), Loiseleur again described this hybrid and named it P. x violacea (not to be confused, however, with P. violacea Vell., a synonym of P. amethystina). After several revisions and corrections, this is now the official name.

There are also variants or forms that have taken different names, for example: P. x violacea 'Victoria', P. 'Lilac Lady', P. 'Eynsford Gem', and others. John Vanderplank tidied up these clones a bit and divided them into 4 'forms'.

In 'form 1', those with a corona of half black and half white filaments, he included P. x tresedieri, P. 'Lilac Lady' and P. 'Mauvis Mastics'.

In 'form 3', 1/4 of the corona is black and 3/4 is white, and this is the most common form. P. x violacea 'Victoria' belongs to this group, but has lighter petals and sepals.

'Form 4' includes P. 'Eynsford Gem', a bushy plant which, unlike the others, bears racemic inflorescences, since it has retained this typical characteristic of P. racemosa.

Its flowers, with a diameter of about 12 cm, always have a dual-coloured corona: the centre is very dark and the periphery is white, with a clear break between the two colours.

The corolla is made up of hooked sepals and petals, both an intense purple colour. Sometimes the shade is not uniform, fading from the edges towards more subdued shades in the centre.

Growing it in pots will give you a plant with a longer flowering period and, if the pot is large, one of great effect.

Good, regular fertilisation should always be carried out throughout the most intense vegetative period and should be interrupted in the cold months.

Propagation is only possible with cuttings.