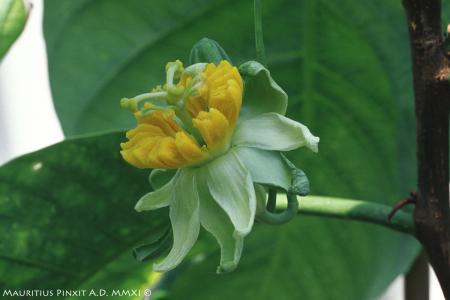 From the Greek μακρός (macros, long) and φύλλα (fylla, leaves): with long leaves.

P. macrophylla, also known by the synonym P. gigantifolia, is not a climber, but a small tree. The evolutionary imagination that strongly characterises the genus Passiflora wanted to create another singular variant in this small tree with enormous leaves. In fact, the leaves reach 90 cm in length and are up to 35 cm wide. Oblong in shape and of a characteristic blue-green colour, they are furrowed by a dense series of marked secondary ribs, placed in a herringbone pattern.

In nature, the tree can reach 4 metres and, due to the size of the leaves, calls to mind the appearance of palm trees.

It lives in the humid tropical forests of Ecuador and Colombia. It is not very hardy, requiring a minimum temperature of 16°C and a high degree of atmospheric humidity. However, I have personally experienced that, at slightly lower temperatures (10-14°C), it will go dormant and lose all its leaves, which will grow vigorously again in the spring. From an early age, it tends to branch out, producing branches that are green and herbaceous at first, then, over time, woody and characterised by a glossy dark brown bark.

Due to its different behaviour, it does not possess tendrils. Its flowers, about 9 cm in diameter and borne by long pendulous racemes, are characterised by a pleasant contrast between the bright white of the petals and the yellow-orange of the corona, formed by 4 series of robust filaments arranged in an inverted cone.

It propagates easily from seed, but also from cuttings, preferably using small branches that are not yet lignified.