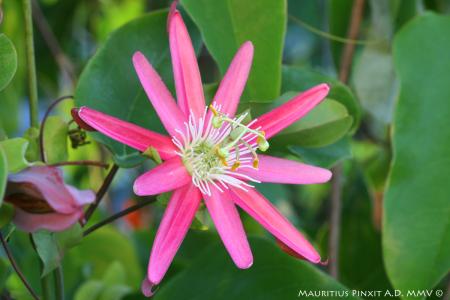 Although P. 'Kew Garden' was officially considered a hybrid between P. caerulea and P. kermesina, doubts have arisen as to its true origin. In fact, its leaves have characteristics similar to those of P. racemosa and many scholars do not exclude that it is a hybrid coming from this species. The information on its origin, however, was incomplete and non-exhaustive. It is now rightly recognised as a hybrid between P. racemosa and P. mucronata.

It is a very beautiful plant whose flowers have an elegant and harmonious shape. The contrast between the corolla in perfect antique pink and the white corona is striking.

The petals are retroflexed and slightly arched. The corona, on the other hand, is stretched forward and the ends of the short filaments curve towards the corolla.

The flower, which has a diameter of about 9 cm, is exceptionally emotive and lively.

The shiny leaves have a leathery texture. The margins of the leaves and the bracts possess a thin red thread rendering them even more graceful.

P. 'Kew Garden' is a robust climber and, if conditions are suitable, it grows quickly and blooms continuously at the ends of its branches. The stem apices bear buds at every node, which grow as the stem lengthens. The open flowers are followed by buds that get smaller and smaller towards the stem's apex.

This passionflower is fairly hardy (4°C minimum winter temperature) and can be acclimatised outdoors in many Italian climatic zones. It can be placed in open ground, for example, in the coastal areas of Liguria and in the south of Italy. With appropriate protection, it can also be tried near the large lakes, such as Lake Garda and Lake Maggiore. Elsewhere it is an excellent pot plant to be sheltered in protected places during the winter.

Propagation is done with cuttings.