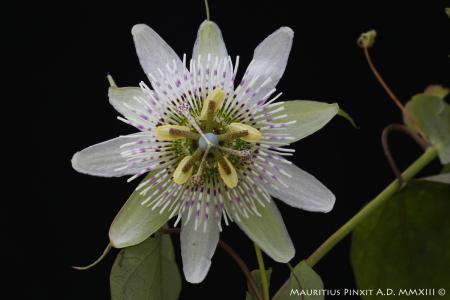 Those who happen to pass by a P. gibertii plant will immediately smell an intense fragrance, not unpleasant, but not overly pleasing either. It has a slightly lemony fragrance but is rather more bitter and with a hint of camphor. The plant is intensely aromatic in its entirety.

This South American passionflower (found in Brazil, Paraguay and Argentina) is also noted for other peculiarities. It is very leafy due to the dense trilobate leaves, whose almost geometric shape lends them a particular elegance: the central lobe, with a large and squat cusp, seems to be made from two circular arcs traced with a compass. The lateral ones have a straight upper edge, perpendicular to the main rib. A large semicircle, which meets the petiole in its middle, embraces the lower part of the leaf blade. The colour is glaucous green, with an ash shading. At the base of the petiole, which is equipped with two small asymmetrical glands placed approximately in the middle, there are two large lunate bracts with a pointed apex.

The stem is very branched, cylindrical, herbaceous, and of an uncommon shade of green.

The flowers, 7-8 cm in diameter, have a soft and delicate colour. The sepals, their upper part white and their lower part green, end in a long curved hook. The petals are white on both sides and have a brighter colour.

The dense and rich corona is formed by numerous series of white filaments dotted with dark pink. The lower ones are almost twice as long and less colourful than the upper ones. The centre of the flower thus appears characterised by white and mauve concentric bands that fade into the white of the filament apices.

Flowering is copious and incessant. P. gibertii certainly cannot be termed an ungenerous plant, since it is among the first to go into flower and remains so throughout the summer. Its ovoid fruits turn yellow-orange when ripe and resemble, in size and colour, those of P. caerulea.

Although it is not as hardy as the latter, in that it does not survive winter frosts, it has good tolerance to cold. It resists temperatures as low as 5°C for short periods, so could be acclimatised in citrus-growing areas, protecting the base with straw or peat. Elsewhere it is preferable to cultivate it in a pot of at least 25 cm in diameter to give it room to express its lively character. In this case, in winter, it must be kept at a minimum temperature of 10°C, in good light, keeping watering to a minimum as it does not tolerate water stagnation at its roots.

It requires rich soil and frequent liquid fertilisation during the period of maximum vegetation. Propagation by cuttings is simple and easy. Seeds can also be used with equal certainty, which will give rise to fast-growing seedlings.