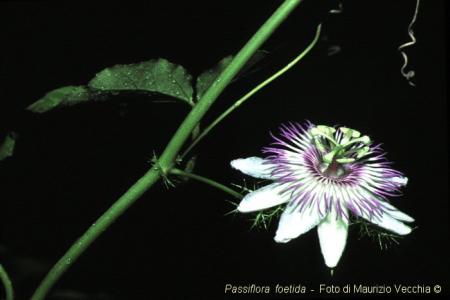 Spread all over tropical America.

From the Latin foetidus, which smells, smelly, unwelcome.

This is a very changeable species, a characteristic that has seen the registration of numerous synonyms. To say P. foetida is perhaps inaccurate, since many varieties, different from each other, but with some common features, are gathered under this name.  P. foetida is one of the most imaginative passionflowers, a real goldmine of surprises. Harvard University has accepted the classification of 44 varieties of P. foetida, but other botanists consider as the same species plants that are classified, by some, as different species, such as P. ciliata (P. foetida var. ciliata), P. fluminensis (P. foetida var. fluminensis), P. arida (P. foetida var. arida), among others. Currently, taxonomists are carrying out the revision and classify some of these varieties of P. foetida as species in their own right.

All these plants together give off an intense aromatic and bitter odour. They have another characteristic in common: the showy and singularly shaped bracts. They are in fact very large and, instead of being whole, are finely jagged and pinnate as if they were a lacey, symmetrical embroidery. Even the flower, although with many variations in the colour of the petals and filaments, is unmistakable. The light, almost hollow fruits, usually bright red or yellow in colour and hung in succession along the stems, are another common feature. None have petiole glands. You will not find a variety of P. foetida with the same leaves. Each of them wanted to stand out and chose a shape of its own. It is therefore not easy to describe such a variable species in just a few lines.

The leaves can be whole, trilobate or, more rarely, pentalobate. The bracts, which are very large and finely divided, protrude from the corolla to embrace it. The sepals and petals of the flowers, which have a diameter of about 6 cm, are coloured pink, violet, purple or blue with all the possible colours and shades in between, up to pure white.

Even the corona follows the family tradition and knows no obstacles or limits to its colouring. It usually consists of numerous series of filaments of a more or less intense pinkish tinge with a lighter, usually white, intermediate band. In many cases, there is a coloured band near the centre of the flower and a lighter one in the terminal area of the corona.

Fruiting is abundant, so much so that one of the decorative features of this plant is the rich festoons of scarlet red fruit.

The safest propagation method to keep its characteristics unaltered is vegetative, from a cutting or an offshoot. Seeds can also be used, a technique that gives good results and introduces further elements of variability.

P. foetida is relatively hardy, as it even bears average temperatures of 5°C with short bursts of around 0°C. It does not survive the northern winters outdoors, but it can naturalise, escaping cultivation, in the warmer areas of Liguria and southern Italy. Even if the mother plant dies from the cold, in the spring the seeds that have fallen to the ground will germinate easily and, thanks to the rapid growth, will flower early.


It adapts to any type of soil, but, if grown in pots, is best suited to a rich, well-drained soil.