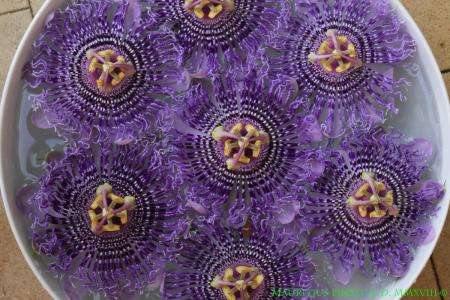 Dedicated to the 'Dance of the Sugar Plum Fairy', contained in the Ballet 'The Nutcracker' by Pëtr Il'ič Čajkovskij

This fortunate hybrid of mine has become very popular: it is widespread and cultivated everywhere, both in Europe and elsewhere. And there is a reason. It possesses all the desirable characteristics for a garden passiflora. The flower is showy, large and embroidered with thick and numerous alternating white and violet bands on the corona made up of filaments with curled apexes.

The first flower opened on 6 August 2006. I had just seen a ballet based on the Nutcracker by Pyotr Ilyich Tchaikovsky, the dance of the Sugar Plum Fairy ('Fata Confetto' in Italian). This light dancer floated elegantly dressed in a deep purple tutu. I immediately associated this image with the flower of the new hybrid. I found the combination suggestive and it is for this reason that I chose the name: Passiflora 'Fata Confetto'.

For a few years, however, a mystery has surrounded the identity of its parents. The card on which I had written the cross-breeding got lost. The fruit had ripened on P. 'Guglielmo Betto', but I could not remember the father. I suspected I had used pollen from P. incarnata as such this hybrid was officially recorded by Les King on 24 August 2007, under number 105. However, I had doubts because the eye-catching morphology of the flower had nothing to do with the origin of the pollen.

I then had the good luck of meeting Luca Braglia, a very good researcher, capable of carrying out molecular analyses. I gave him material from this and other plants and the mystery was revealed: the pollen came from a cultivar of P. cincinnata, the P. cincinnata 'Dark Pollen', so called by specialised nurserymen for having the darkest pollen of the typical species. On the other hand, P. incarnata could not have given rise to such a showy and rich flower.

In my garden, the P. 'Fata Confetto' has survived very rigid winters, up to 16°C below zero. Its herbaceous posture preserves the roots underground once the aerial part is completely lost when the first colds arrive. The sucker-producing capacity is very high, so much so that P. 'Fata Confetto' can be considered invasive, also due to the fast growth and the large size it reaches. I have seen specimens over 15 metres wide that made up a dense barrier on fences. The generosity of flowering is impressive. Starting from the end of April and until the end of October, there are continuous flowers, sometimes followed by spontaneous fruit, at each node of the stem.

P. 'Fata Confetto' is one of the easiest passifloras to grow that I know. In open ground, nothing needs to be done. Its vitality is such that it grows without care, even in poor soils. Indeed, over time it becomes explosive and intrusive thanks to the numerous root suckers that it emits, even far from the main stem. These suckers are useful for its multiplication. In this way, ready flowering plants are obtained. In a pot it is just as easy as long as it is placed in sufficiently large containers, equipped with adequate supports and watered regularly. Regular fertigation treatments are also useful for even more showy flowers. No pruning is necessary; indeed, it should be avoided.

P. 'Fata Confetto' is an excellent mother because it is receptive to different pollen and I have obtained other beautiful hybrids from it , such as P. ‘La Lucchese,  P. ‘Stefano Capitanio’, P. ‘Fata Morgana, etc. I have summarised the characteristics of this hybrid below.

Here you can read an interesting description of this hybrid:
http://www.fruitiers-rares.info/articles87a92/article90-Passiflora-Fata-Confetto-observations-culture.html

PRAISE OF THE PASSIFLORA 'FATA CONFETTO'.
This hybrid has all the unique and desirable characteristics:
- large, rich and elegant flowers, not less than 10 cm in diameter;
- delicate scent;
- fruits with a pleasant flavour;
- incessant and rich flowering from May to October;
- great attraction for many insects, bumblebees in particular;
- vigorous development;
- sucker-producing behaviour, a characteristic that facilitates its multiplication and diffusion, impossible to lose it;
- usable as a garden plant even in the climates of northern Italy, very suitable for covering fences and pergolas;
- easy to grow even in pots;
- herbaceous habit with loss of the aerial part in the winter season;
- resistance to all parasites, including root nematodes;
- finally, truly exceptional hardiness, as it has survived winters with cold temperatures down to -16°C in the open ground.