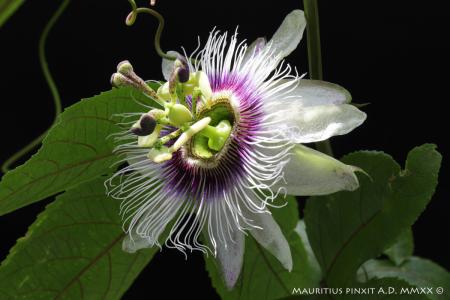 All over Brazil where it’s native. Naturalized in Jamaica, Central America, northern Venezuela and Ecuador.This species has commercial uses and therefore is amply cultivated in all zones of the world with the suitable climate.

From the Latin edulis, edible, referred to its fruits of pleasant flavor, among the best in Gen. Passiflora.

It is rare to find very beautiful flowers and equally good fruit on the same plant.  Passiflora edulis possesses these two virtues, thanks to which it is one of the best known and most appreciated. In fact, it has considerable commercial value (Maracuja) and, due to the characteristics of its fruits, is now grown on a large scale in regions with a suitable climate.

Those lucky enough to live in a citrus-growing area will be able to grow it in the garden, where it will grow for many metres along a fence or on a pergola, bearing fruit generously. Those who live in the Po Valley, on the other hand, or in other areas with a similar climate, will be able to keep P. edulis in pots without any problem. It withstands winter temperatures of around 5°C for long periods, tolerating even short frosts, as long as they are not intense.

This plant, originally from Brazil, is now widespread, in addition to South America, across all tropical and sub-tropical areas of Asia, Africa and Oceania, where it is also grown at heights above 2000 metres. A large number of valuable varieties have been selected and it is used to produce interesting hybrids.

P. edulis can stretch its shiny stems up to 8 metres. It has large trilobate leaves with serrated edges which, in robust and healthy specimens, can reach a length and width of 20 cm. The blade is a beautiful bright green and is strengthened by protruding ribs. The petiole, just near the point of attachment with the leaf, bears two glands.

The flower has a diameter of 6-8 cm and comprises sepals that are white above and green below. The petals are completely white. The corona is among the richest and most showy of the genus Passiflora, since it is formed by five dense series of filaments longer than the petals and very curled at the apices. The initial part, in the centre of the corolla, is white. It then becomes deep pink with some small bands of contrasting colour. The final half, up to the apex, is again white. The whole flower is scented and has the fluffy appearance of a cotton ball. There are also completely albino cultivars such as the spectacular P. edulis 'Norfolk' and P. edulis 'Albina'.

The fruits are slightly ovoid with a diameter of 5-6 cm; when ripe, they become dark violet in colour. They contain a very aromatic pulp, with an intense fresh scent and a sweet, delicately sour taste. It can be consumed as is or used to make thirst-quenching drinks, smoothies and even liqueurs. When ripe, the fruits spontaneously detach from the plant, so they can be harvested without difficulty.

P. edulis is such an easy climber to grow that it is recommended even for beginners. In a pot, it requires a rich, well-drained soil and stakes at least 1.5 metres high. In the summer, it can be left outdoors.

The simplest way to obtain it is to buy the fruits and extract the seeds. In the second year after sowing, it will go into flower and then fruit. Propagation from cuttings is an equally easy method and is the only one that allows the organoleptic characteristics of the fruit to be kept constant.