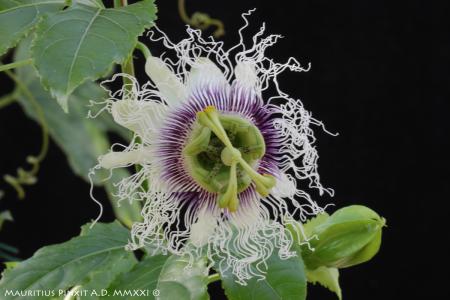 All over Brazil where it’s native. Naturalized in Jamaica, Central America, northern Venezuela and Ecuador.This species has commercial uses and therefore is amply cultivated in all zones of the world with the suitable climate.

From the Latin edulis, edible, referring to the best fruits in Gen. Passiflora.
This form, unlike the typical species, has yellow fruits (Lat. flavus, yellow and from the Greek καρπός, carpόs, fruit).

This passionflower, whose origin is still unclear, is a yellow fruit form of P. edulis Sims. It has many characteristics similar to the typical species, but also significant differences.

It has red stems, especially on the areas exposed to the sun. The petioles of the leaves and part of the veins are dark red. The leaf lobes are more incised and elongated. The flower is larger and with more contrasting colours: half the corona, starting from the centre, is dark violet, almost black, while the apices are white, and more rigid and less curled than those of the typical species.

The fruit is large (it can reach 8-9 cm in diameter) and, when ripe, turns an intense yellow. Inside, the yellow pulp has a more acidulous flavour and weaker fragrance than P. edulis. Its assets, therefore, lie in the size of its fruit, its appreciated colour, and its resistance to diseases. It does not suffer from nematode attacks, which have instead destroyed entire plantations of P. edulis. In Brazil alone, there are over 30,000 hectares dedicated to the commercial cultivation of this passionflower, and it is also used as a rootstock.

The cultivation rules, dimensions and hardiness are just like those of the typical species.

Many other cultivars and hybrids of P. edulis with P. edulis f. flavicarpa have been selected, which are of commercial interest due to the colour, size and flavour of the fruit. For example, the 'Fredrick' cultivar has large red fruits, the 'Black Knight' has black ones, and the 'Nancy Garrison' selection has large, purple-coloured fruits. The 'Norfolk' cultivar, with its very aromatic dark red fruits, has curious albino flowers.