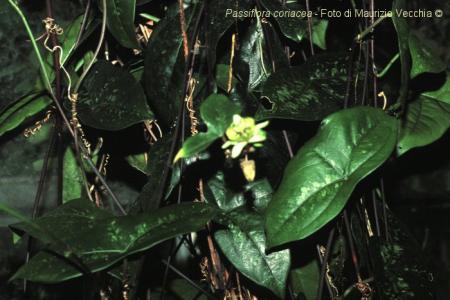 Mexico, Peru and northern Bolivia up to 2.000 m of altitude.

This South American passionflower is among those with the most beautiful and original transverse leaves due to their shape, reminiscent of bat wings, their leathery texture, their very dark green colour embellished with pale irregular spots and their considerable size.  P. coriacea is among the most sought after and cultivated by collectors, but also among the most widespread in the greenhouses of botanical gardens, where it is admired for its exotic and unusual appearance.

It can be used as a houseplant, as it adapts to low light environments. It is not very hardy and won't thrive in winter temperatures below 10-12°C, although it can tolerate minimum temperatures close to 5°C if these are short-lived.

It has robust, resistant stems and is hairless in its entirety. The leaf petiole usually has two pairs of glands and is inserted into the blade in a peltate position, i.e. more internal than the margin, from where it divides into five main veins.

The bilobate leaf can reach a width of about 30 cm but a height of only 6-7 cm, giving it a flattened, decidedly transverse appearance. The upper and lower margins are parallel for almost the entire width of the leaf, except at the ends of the two lobes, which are pointed. The background colour of the upper blade is an attractive dark green. Some light green, occasionally pale yellow, irregular spots decorate the leaf, which is shiny and bright.

Flowering is also particular, as it occurs on terminal racemes bearing, in large specimens, over one hundred buds in various stages of opening. The flowers, very light green and inconspicuous, are only 3 cm in diameter. They are formed by the five sepals, with no petals. The corona is composed of two series of filaments, brown at the base, fading into green in the middle, and ending with intense yellow apices.  P. coriacea produces abundant globose fruits with a diameter of about 2 cm, dark blue in colour.

The whole plant contains an insecticidal active ingredient which is the subject of studies for possible practical applications. This protects it from attack by the most common parasites such as aphids, cochineal insects and mites.

It must be grown in pots in a rich and well-drained soil. If you want it to reach a considerable size you can put it in pots of 25-30 cm, otherwise in those with a smaller diameter. To enhance the aesthetic features of the foliage it is advisable to let it grow densely and wrap around itself several times by providing it with supports that are not too high.

Propagation is done with cuttings and seeds.