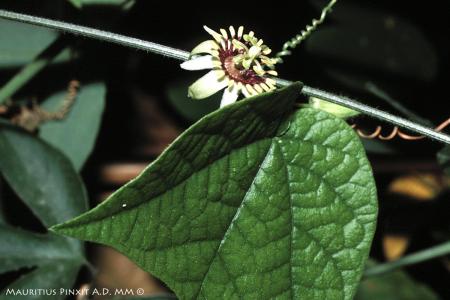 Dedicated to the Italian botanist Cassiano Conzatti (1862 - 1951).
He emigrated to Mexico in 1881 and remained there throughout his life. He published 32 works dedicated to Mexican flora.

It is another species of the vast subgenus Decaloba and is also characterised by the original shape of its bilobate leaves. This Mexican species has in fact developed a unique and different variant from that of other similar species. The two external lobes are open and not very pronounced while the middle lobe is barely visible or even non-existent. The leaf, supported by a petiole devoid of glands, thus seems to have been precisely cut in a transverse direction, its shape resembling that of a bell. The upper, slightly tomentose side is of a beautiful bright green, while the underside is more opaque and green-grey in colour.

It grows densely and decisively, continuously emitting secondary branches, leaves and flowers. Its overall appearance is decorative, despite its inconspicuous flowering. It is appreciated for its small size, its lively growth and its ease of cultivation. It has a tendency to emit root suckers and, sometimes, even when apparently dead, will re-emerge from the roots.

It must be grown in pots using well-drained soil. It requires frequent watering, since, despite having a stagnation-sensitive root system, it suffers from a lack of water.

The whole plant is tomentose and both the stems and the leaves' petioles, if placed in a well-lit position, can take on a pleasant red hue. It almost never exceeds two metres in length but, if propagated from cuttings, will bloom even when still small.

The flowers have a maximum diameter of less than 2 cm. The petals and sepals are pale green, sometimes whitish. The corona, on the other hand, is more conspicuous due to the bright yellow apices of the solid, slightly enlarged filaments, and the dark red and intense brown of their base.

It tolerates a minimum winter temperature of 12°C, but a few degrees more give better guarantees. It cannot be grown outdoors except in the hottest areas of the peninsula, where it still needs to be protected.

Its long, narrow fruits contain seeds that can be used for propagation. In Italy, however, it does not bear fruit easily, so we resort to propagation from cuttings, which is simple and offers guaranteed results.