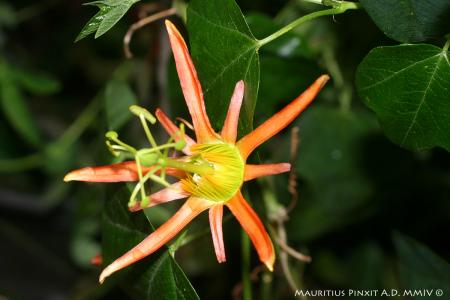 The color of the flowers is similar to that of cinnabar, mercury sulfide, HgS.

Its country of origin is Australia and the colour of its flower recalls that of the sunny expanses of its homeland.

The cinnabar red of the sepals is a rare colour in the Passiflora genus. The shape of the flowers also differs from that of its American sisters, since the petals are almost non-existent and reduced to mere outlines. The structure of the flower is, therefore, provided by just 5 long, narrow sepals, positioned at 72° from each other like rays from an invisible pentagon inscribed in a 6-7 cm diameter circle. It looks like a plant with little starfish hanging from it. Just as P. actinia brings to mind sea anemones, so P. cinnabarina brings to mind these other living creatures of the seabed, as if a mysterious and inexplicable bond unites these climbing plants with the sea's depths.

Another peculiarity is the colour of the flowers and the leaves: both the red and the green are lighter as if diluted with yellow. It is precisely this intense colour that appears in the centre, within the small, dense corona of filaments.

It bears abundant fruit, which is green and slightly elongated in shape, and about 4 cm in diameter. The seeds germinate easily. Rooting cuttings is difficult and slow.

It is a simple plant to grow because it has no particular needs and grows vigorously and quickly. When it is in full growth mode its shoots seem to lengthen visibly, continuously emitting wrinkled, slightly tomentous trilobate leaves. If you give it space, in one season its thin stems can reach 4 metres in length, thickening with numerous secondary shoots.

It prefers soft, light soil to which sand has been added. In fact, it has a delicate root system that is sensitive to excess moisture.

It is not very hardy and is unable to withstand even short frosts. In northern Italy, pot cultivation is the simplest way to see it in bloom year after year. In this way, it is possible to protect it during the winter by preventing the temperature from dropping below its critical limit of 7-8°C. In warmer climates, it can be grown outdoors where it will survive and recover in the spring, even if it has suffered some slight damage.