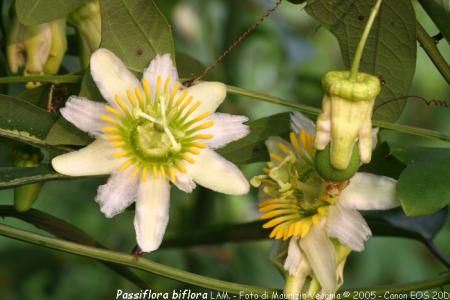 From Mexico to Colombia and Venezuela, Belize.

It refers to the production of two flowers at each node of the stem.

This plant has bilobate leaves, with pointed apices, in the shape of a crescent. The petiole is situated halfway along the lower margin, in such a way that the leaves run transversally.

I remember one day when, at an exhibition of unusual plants, I was approached by a student who asked me if there really existed a passionflower 'with crescent-shaped leaves, like a crescent moon' as reported by some Aztec inscriptions. I showed her the very P. biflora I had with me. Incredulous, she recognised it: it was the same one that the ancient Indians had carved.

P. biflora is widespread across Central America, particularly in Mexico and Venezuela. It has leaves with an uncommon shape, decorated by two series of leaf glands running along the lateral veins. The stems have a pentagonal cross-section and are glossy, black or very dark green. The flowers have a white corolla and a yellow corona. They are followed by fruits of a purple so dark they appear black. All these features make P. biflora one of the most beautiful of the Decaloba subgenus.

Its name originates from its characteristic production of flowers in pairs which, although elegant, only reach 3 cm in diameter. They consist of slightly retroflexed white petals and sepals. The corona of filaments is, for the most part, a nice strong yellow. Flowering occurs at the apex of the stems which, as they grow, emit coupled leaves and buds. The plant continues to bloom as it grows, keeping the flowers in sync two by two.

Unfortunately, it is not very hardy: in winter, its safe temperature is about 10°C, but it is better kept at around 12-13°C so that it meets the spring in better condition. It must therefore be grown in pots and, in the summer, can be placed outdoors and made to climb along trellises or supports. It then develops a few metres of very floriferous shoots, which in autumn are loaded with black fruits, a little larger than olives.

P. biflora is one of the most sought-after among collectors of genus Heliconius butterflies, since it is very well-liked by the caterpillars of these moths and, at the same time, is the most decorative among the passionflowers used for this purpose.

There are several forms of P. biflora. It is a species that shows great variability and it is easy to confuse with other plants of the same subgenus such as P. punctata, P. vespertilio and P. cuneata.

Reproduction is obtained by seed. Propagation is quick and easy from cuttings.