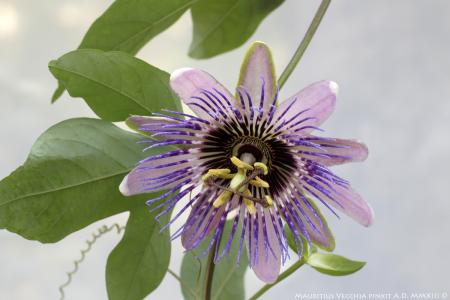 The first known record of this historical hybrid dates back to 1824 (Lindley), with the botanical name of P. x alato-caerulea. Subsequently, it took the name of P. 'Empress Eugenie', which, for commercial reasons, was translated into various languages, thus creating a considerable number of variants. Now its long-accepted official name is P. x belotii.

The blend of delicate colours possessed by this hybrid's large flowers contrasts with its robustness and rapid growth. The sepals are pale, almost white; the petals are pink; and the corona, made up of 5 series of filaments, is violet, except at its base that is shaded in white. Thus nature, aided by man's intuition and imagination, has created very pleasant chromatic effects in this flower, making it one of the most sought-after and popular.

Its robust bearing and relative hardiness are further appreciated features.

Indeed, I have seen P. x belotii in open ground in central Italy, as well as in the south. This hybrid passionflower survives well outdoors, as long as frosts are sporadic and not too severe. A temperature of 4-5°C is ideal for passing the winter months safely. However, it is always advisable to put in place timely protection for the aerial part, after having applied a substantial peat mulch at the base.

It is not easy to distinguish P. x belotii from P. x allardii, as the two hybrids are very similar. P. x belotii, however, displays a more decisive chromatic contrast between the sepals and petals; moreover, the corona of filaments is shorter than the corolla. In P. x allardii the filaments are darker in the second half while lighter in the first, and are almost as long as the corolla itself.

Propagation is only possible from cuttings.