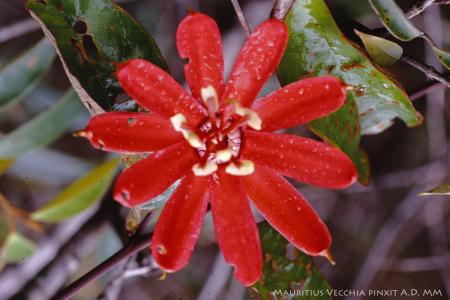 ETYMOLOGY: It is dedicated to Aimèe Govindoorazoo, mother of Hilaire Annonay (Martinique), discoverer of this species.

French Guiana, once again, in 1998, revealed a treasure: a new species discovered by Hilaire Annonay, classified and registered the same year together with Christian Feuillet. This finding testifies, first of all, that our knowledge of gen. Passiflora is incomplete and that there is still much to be found in the thick of the forests. Hilaire demonstrated this for the second time (see P. cerasina).

The very rare P. aimae, similar to P. coccinea, is a liana with lignified stems found along the 'Piste de Saint-Élie'.

Its leaves, which measure about 8 cm in length, are whole and oblong in shape with a crenulated margin. The petiole bears two or four glands situated at the base and in the middle. Others are arranged on the leaf blade, on the stipules, and on the bracts.

The flower has a diameter of about 9.5 cm. The sepals, hooked at the apex, and petals are scarlet red. The corona is formed by two series of filaments, the outer ones white and the inner ones red, which rest on the androgynophore column.

The only two specimens found were about 5 m long. I don't remember the characteristics of the fruits.

It is still premature to talk about cultivation rules and needs for this new species, not yet widespread among enthusiasts and in botanical gardens. It will surely have more luck in the coming years, once it has been studied and understood more thoroughly and, perhaps, is also available to be grown in pots.