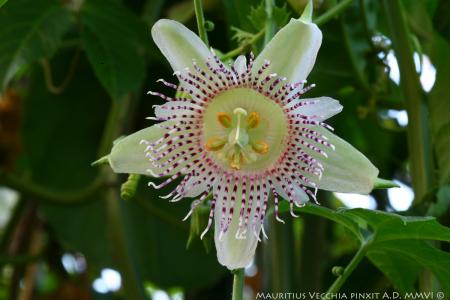 From Mexico to Venezuela.

From the Greek ἀδένος (adenos, gland) and ποδός (podos, foot, peduncle) as the glands of the petiole are supported by a short peduncle.

A passiflora native to the mountainous areas of Central America, from Mexico to Peru, it has large lobed leaves similar to those of the vine and maple.

The whole plant is conspicuously bristly, both on the stems and on the leaves, sufficient to be sticky to the touch. The leaves are formed by 3 or 5 large lobes supported by sturdy nervation. They stick to clothes so much that it is called 'Velcro Passion Fruit'. The edge is denticulated. The long petiole has two large spherical glands supported by a short peduncle near the leaf. This characteristic is at the origin of the name which means 'glands supported by a peduncle'.

The flower is white and purple and has a diameter of about 7 cm. The hooked sepals are white or pale yellow with a green tinge. The petals, which are larger, are white. The crown is made up of a single series of white filaments with dark purple concentric bands. The globose fruits are also covered with a thick down and turn violet when ripe. Unlike the fruits of almost all other species, which are edible, they appear to be toxic.

P. adenopoda has an interest purely for collections, although it is appreciable for some of its characteristics such as vivacity in growth, the singularity of the flowering and the width of the leaves. It is also used by collectors of tropical butterflies of the genus Heliconius.

It does not have sufficient hardiness to be grown outdoors in most Italian regions. In fact, it hardly stands temperatures below 7°C.  In Italy it is to be used as a pot plant which, during the cold months, should be placed in a greenhouse or in the house, near a bright window. In the summer, however, it grows generously and produces very large leaves. Flowering is abundant if the climatic conditions are congenial.

It prefers a good universal soil rich enough to be able to grow without problems.