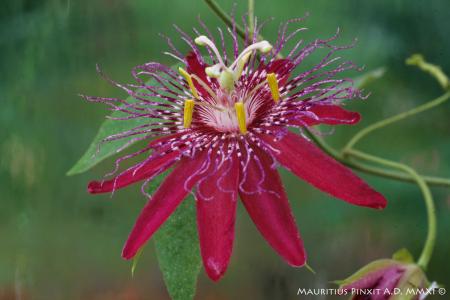 P. incarnata has soft colours: various shades of pink and white. Its successful combination with the red P. coccinea has produced this hybrid with more vivid colours, staining the P. incarnata flowers a decisive bright red.

It can be said that in this plant the paternal and maternal characteristics have been distributed equally, taking the best from each of the parents: the maternal red has been kept in the corolla and in the corona. The latter, however, is not small in size like that of P. coccinea, having rather acquired the large, curled appearance of P. incarnata's flower. Only some pinkish bands, alternating with dark red, appear in the filaments to recall the paternal flower.

The trilobate leaves are covered by a slight tomentosity which differentiates them strongly from the glossy leaves of P. incarnata.

P. coccinea's lack of hardiness has been greatly improved, even though it does not achieve the exceptional hardiness of P. incarnata. However, minimum winter temperatures of 2°C in Italy are not to be disregarded, leaving many areas suitable for the cultivation of this hybrid in open ground, with or without winter protection.

The flowers have a colour between bright red and deep pink. The corona is made up of five series of variously coloured filaments: purple, red, pink and white, with contrasting bands, sometimes irregular.

P. 'Red Inca' does not skimp on its flowering. Freshly rooted and established cuttings have a tendency to sprout buds. The grown specimens are always rich in flowers.

Where it is not possible to cultivate this hybrid in the ground, excellent results are obtained if you use pots of 25-30 cm in diameter, equipped with supports or trellises with dimensions proportional to the growth of the climber.

Propagation is possible only vegetatively.