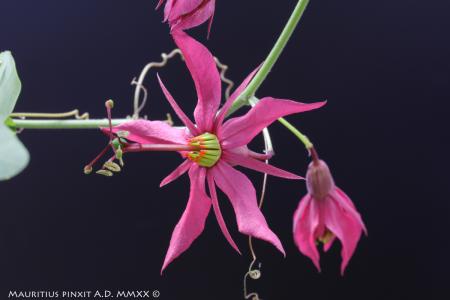 From the Greek prefix περι, peri, all around and from the Latin foliatus endowed with leaves: perfogliato, with leaves that completely surround the stem.
Denomination referring to the morphology of the leaves that are joined to the stem.

The most evident feature of this passionflower is the shape of its bilobate leaves: the lobes, wide apart and diverging from the rounded apices, are very long and thin (up to 12 cm in length). The petiole is so short it seems that the leaves are attached directly to the stem, almost like sheaths of the stem itself. Their colour is uniformly dark green with a slight bluish dominance.

The starry flowers have a purple colour, sometimes with brown shading. The 5 sepals and 5 petals are of the same length, but the sepals are at least twice as wide as the petals. The petals, therefore, stand like thin needles in the middle of a great five-pointed star, resembling rays of light.

This passionflower also differs from others in its way of flowering. You will never see small green buds growing and enlarging until it is time for the flower's bright colours to emerge. In fact, P. perfoliata has coloured buds, the same shade as the open flower. Not only that; flowering, which occurs at the apices of the branches, is progressive, meaning that next to the already open flowers there are smaller and ever newer buds, as the branch gets longer.

The corona is formed by a single series of short, stocky filaments, facing the centre of the flower and light green in colour, embellished at the apex with a shiny red spot.

This plant is suitable for growing in pots. It is good to provide it with supports that are not too high so as to force it to wrap around itself several times. In this way, the liveliness of the foliage will be accentuated by the presence of the terminal spikes of buds and purple-brown coloured flowers.

In winter, it is advisable for P. perfoliata to be kept at temperatures around 15°C in a well-lit position. This will prevent it from becoming ugly with the loss of most of its leaves.

It prefers rich, well-drained soil, but tolerates less than ideal situations with relative ease. Sometimes it can lose its aerial part almost completely, but will quickly recover if favourable climatic conditions are restored to it.

Reproduction from seed is easy, so much so that almost all seeds germinate after about 10 days. Rooting from cuttings is also rapid.