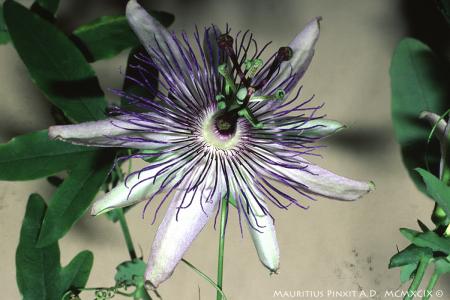 For the appearance of a large white star that recalls the brightness of the planet Venus.

After two years of patience, the first flowers appeared, bearing a white, retroflexed corolla and a violet corona. At first, I thought I recognised them and had seen them before somewhere. In fact, I found a certain similarity with those of P. 'Star of Clevedon', one of John Vanderplank's hybrids, which I had in bloom at that very moment. A simple comparison, however, revealed some substantial differences to me.

The corona of filaments of P. 'Venus' is certainly larger although sparser. In P. 'Star of Clevedon' it has an intense violet-blue colour and covers less than half of the corolla. In P. 'Venus', on the other hand, it reaches almost the length of the petals and sepals. It has a more violet colouring with a large white ring about half its width. The shape of the petals and sepals themselves differs, with those of P. 'Star of Clevedon' being narrower and slenderer.

The image is that of a fluffy, feather-like flower, with its large corona stretched forward away from the petals and sepals.

I did not come up with the name. I had sent the photograph to the secretary of the 'Amici della Passiflora' Club saying that I had no intention of giving any name to this new hybrid and that I did not know what to do. The reply email was titled 'Venus'. I accepted the advice, considering the name imaginative and pleasing.

This hybrid, which was also successfully tested outdoors on the Ligurian Riviera, remained alive for a few years then was lost. It is now extinct.

There is now another hybrid named P. 'Venus', a hybrid composed of P. ´Wilgen R. Robertson' x P. ? created by Bettina Ulmer in 2011. I don't know if the name 'Venus' could have been used, given that I published a hybrid under this name in 1999, but it will be left to the taxonomists to settle the question. I am using this space to raise the issue and would like to hear others' opinions.