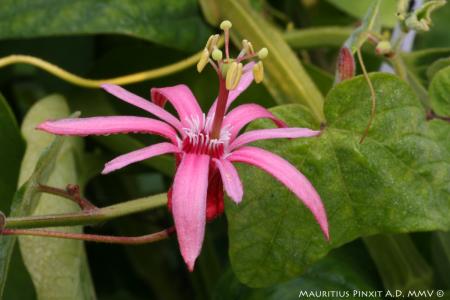 Like almost all the passionflowers belonging to the subgenus Decaloba, P. sanguinolenta also has bilobate leaves. In this case, they are even lunate since the two lobes do not protrude excessively from the median part of the leaf blade. The sinus between the two cusps and the base of the leaf is semicircular so recalling the shape of the crescent moon.

This climber has short internodes and is rich in lateral branches. The leaves, like the flowers and tendrils, are produced at the nodes of the stems: the closer they are, the denser the foliage. The numerous small secondary branches cling to the supports by means of tendrils and, at the same time, also wrap around each other creating an impenetrable tangle. This green surface is then enlivened by myriad pink flowers.

They are among the most beautiful of a subgenus that usually has few meaningful flowers. The shape is elegant, thanks to the slender, open sepals and petals. The sepals are longer than the petals and both alternate to create the effect of two dark pink stars, one larger and one smaller, concentric to each other. The colour is intense in the centre of the flower and gradually fades to light pink towards the ends.

The corona, leaning against the androgynophore and having the same small diameter as the calyx, is formed by two series of short filaments, coloured dark red except for the apex which is white.

The stem of the flower is usually long and slender, almost as if it wants to extend the corollas away from the curtain of leaves that would tend to hide them.

P. sanguinolenta is to be counted among the easiest of passionflowers to grow. It can be kept in pots of 15-20 cm or even larger. In this way, a plant is obtained that is striking both for the singularity of its foliage and for the beauty of its always abundant flowers.

Its fruits are elongated and slightly ribbed, similar to those of related plants such as P. capsularis, P. citrina and P. rubra.

It has limited resistance to cold, and suffers at temperatures below 6-7°C. It must therefore be brought indoors during the winter season; however, thanks to its small size, it lends itself well to becoming a houseplant, where it grows and blooms without difficulty, as long as it is placed in good light. It should be cultivated in rich, well-drained soil, helping it with liquid fertilisers administered once a week.

It reproduces both from cuttings and from seed.