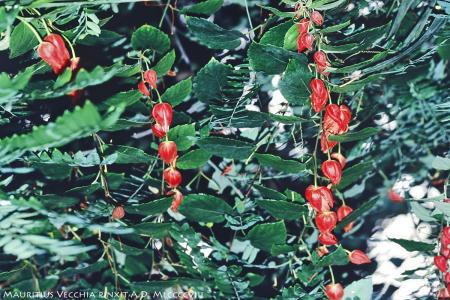 From the Latin quadrifarius, quadruple, referring to the crown formed by four series of filaments.

In the large greenhouse of Kew Gardens, near London, one of the many spectacular plants to admire, striking one with its long festoons dropping from great height and dense with showy bright red flowers, is P. quadrifaria.

It can be said that this climber grows while blooming. Even where the flowers have not yet blossomed, the large blood-red bracts that enclose the buds offer a decorative effect capable of arousing equally intense emotion. Thus, the scarlet red and decisive green colours, which stand out so vividly, are its main attraction.

This beautiful plant was discovered by J. Pires-O'Briens in 1989 in the forests of the Brazilian Amazon; its definitive description and classification, by John Vanderplank, dates back to 1996. It was not immediately recognised as a separate species, being initially confused, due to its resemblance, with P. vitifolia and P. coccinea.

It is therefore a recent acquisition and only possible to admire in Europe for the last few decades, thanks to John Vanderplank himself. It is not available from nursery collectors.

The leaves of this climber, with stems over 15 m long, are whole, ovate with an acute apex and margins with double serrations (serrulate). In consolidated specimens, they can exceed 20 cm in length and 13 cm in width. Two glands are located at the base of the petiole while other, very small glands are scattered across the leaf blade itself.

The flowers, about 10 cm in diameter, have hooked sepals and petals, both bright orange-red in colour. Four series of short blood-red filaments enclose the base of the androgynophore, which is of the same colour.

The fruits are pear-shaped, green with dark vertical streaks.

Its tropical origin limits its diffusion, rendering it unadaptable to continental climates. However, it gave rise to a splendid hybrid, P. piresae, made by John Vanderplank himself and widespread among collectors.

It must be kept in large heated greenhouses where the microclimate of its homeland can be constantly reproduced.

It propagates more easily from seed than from cuttings.