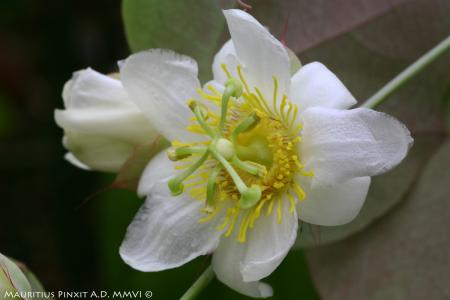 It is difficult to distinguish this passionflower from P. hahnii, because the two species look apparently identical. Only careful examination allows the exact classification. When they are not in bloom they can be distinguished by a small detail, a minimal difference in the foliar stipules: both are reniform, however those of P. guatemalensis are serrated with long, thin erect hairs, absent in P. hahnii; moreover, the latter has solitary flowers at the axil of the leaves, while the other produces them in pairs as is seen in P. biflora. The two species are otherwise similar, their leaves having the same shape and their flowers the same colour.

P. guatemalensis is a glabrous plant, with thin stems and the typical glaucous green colour, that grows dense and impenetrable. Its leaves have an unusual and uncommon shape within the genus Passiflora. They are wide and almost ovate at the base, while the apex, to be considered the central lobe, is pointed. To the right and left of the upper part of the leaf, there are two barely visible indentations, running in the direction of the external ribs, as if to assume the presence of two side lobes that failed to emerge. The large stipules, with long comb-like teeth, add a further element of curiosity.

It is not suitable for growing in the open ground, even in the hottest regions of Italy, as it requires minimum temperatures above 10°C. However, it is very decorative if grown in pots, having it climb on supports, or using it as an elegant hanging plant. It is not easy to see it in bloom here, so one has to rather content oneself with the beauty of its foliage. In summer, it can be placed outdoors in full sun. In this case, it requires careful watering, which must be done almost daily, especially on the hottest days. It is good to cultivate it in rich, well-drained soil, avoiding water stagnation.

Since it rarely bears fruit, it is advisable to propagate it vegetatively via the cutting method.