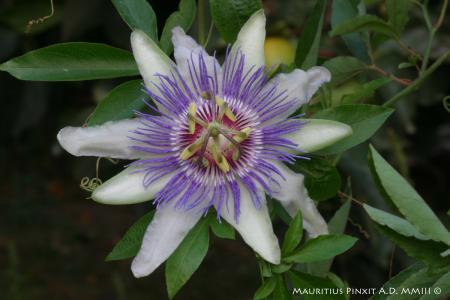 It is named after the English nursery Colvil's Nursery.

It was a successful idea to produce this hybrid using two very hardy species: P. incarnata and P. caerulea.

From the former it inherited, and accentuated, the most intense colour of the filaments; from the latter, the shape of the leaves and, in part, the colour of the corolla; from both, a lively, exuberant growth and resistance to cold. The flowers are larger and richer than those of P. caerulea, from which they actually took their appearance. Only an occasional slight pink tinge on the petals and sepals betrays the involvement of P. incarnata.

The almost herbaceous behaviour is a maternal characteristic and, like P. incarnata, it can completely lose its aerial part in winter, to re-emerge in the spring from roots that have remained dormant underground.

The flowers are larger than those of both species, easily exceeding 10 cm in diameter. The corona is not curled like that of P. incarnata, composed rather of straight filaments, apart from slightly undulating apices. It contains various alternating colours: dark violet in the centre, white for 4-5 mm, then blue up to the apex, where the colour fades towards an increasingly lighter blue.

This climber is certainly an interesting hybrid, although still not very widespread. It certainly does not lack the qualities required of a garden plant: beauty, hardiness, simple cultivation, absence of diseases and problems, and adaptability.

It is recommended for those who wish to thickly cover metres of light fencing, a pergola or a bare wall. When it blooms, the show is enchanting and one cannot but stop to admire the large starry flowers immersed in a green sky of elegant shiny leaves.

Cultivation is as easy as it gets: the plant needs no special care; however, it does not tolerate tight spaces and prefers being able to grow as it pleases. In such conditions, it will bloom in succession from June until late autumn.

P. x colvillii should be protected during the cold season by placing a good layer of peat at its base. New stems will sprout in the spring, followed by rapid and full growth, accompanied by enthusiastic flowering, in the summer.

Propagation is done with cuttings, or by using the numerous root suckers that sprout at a distance from the mother plant.