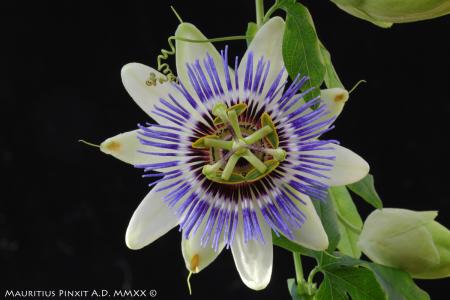 From southern Brazil to Argentina.

From the sky blue color of the crown (Lat. caeruleus).

For most people, speaking about 'Passiflora' means speaking about P. caerulea. Indeed, it is the most widespread species in Europe; it is, in fact, often the only known passionflower.

It owes its diffusion to the remarkable hardiness that allows it to survive particularly cold winters unscathed, resisting even drops to -15°C.

It is generous in its flowering and its fruit is very decorative. Once cultivated it is almost impossible to eliminate, as it spreads by way of root suckers rapidly and with remarkable vitality. It can even be the cause of quarrels between neighbours and lead those who wanted and planted it to regret their decision. Its invasiveness can become unbearable.

It is of no use pruning it drastically or tearing it from the ground. Not even a particularly harsh winter will get the better of it. It may severely compromise the foliage, but it will have no effect on the roots left behind. So sooner or later it will return to develop vigorously.

Outdoors, it never seems to have enough space and will only bloom when it has reached a considerable size. In a pot, it will thicken with flowers even if only a little over a metre tall.

It is native to Brazil and Argentina and was imported to Europe a few centuries ago, giving rise to many varieties, including 'Chinensis', 'Grandiflora', 'Constance Eliott', 'Pierre Pomié', etc.

This evergreen climber, with hairless and robust stems, can exceed 15-20 m if over the years it is left to grow freely in a sunny and warm position. It creates impenetrable curtains if placed against fences.

The leaves are large, in cases exceeding 15 cm in width and length, and are multi-lobed, always with an odd number: 3, 5, 7, 9. They are supported by a petiole up to 4 cm long and bearing pairs of glands varying in number from 1 to 3, and strengthened by strong and protruding ribs. It has large pointed reniform bracts.

The flowers can reach a diameter of about 10 cm in the typical species, greater in some varieties like P. caerulea var. grandiflora. The sepals are white, marked by a light green shade, and end in a soft spike; the petals are similar, sometimes slightly pink with rounded apices.

The corona, which, with its colour, has given the species its name, is made up of a few series of robust filaments, with a dark purple shade at the base, white in the middle and blue at the apex. These colours vary in intensity according to the variety. The corona gives the effect of two concentric coloured circles separated by a white one.

The fruits are ovoid, about 4 cm long and 2-3 cm in diameter. When ripe they are of a beautiful orange-yellow, giving further decorative value to the species. Inside, immersed in a translucent pulp that varies from yellow to red, there are numerous black seeds.

Seed propagation is easy, but introduces variability and produces plants that will flower only after a few years. Propagation by cuttings guarantees an earlier flowering and a consistency of features. Another very simple method is to use root suckers.

Cultivation is easy, as P. caerulea adapts to all soils, even the poorest ones. It resists drought well and does not require special care, except for pruning when needed to reduce its size.

Numerous hybrids have been obtained from P. caerulea and are described on this website.