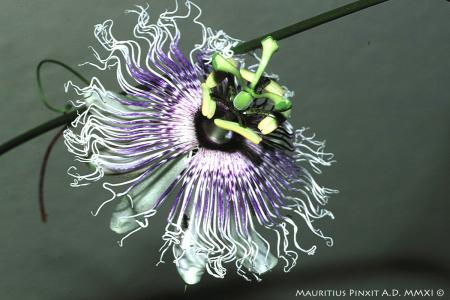 Tinalandia is a nature reserve in Ecuador.

This is another beautiful P. Worley hybrid. Unlike what was done with P. 'Byron Beauty', the flavicarpa form of P. edulis was used. The flowers of the two hybrids, although similar in some characteristics, are in fact very different in their aesthetics and colours. This is due to the parents used in the production of the hybrid. P. 'Tinalandia' is a polyploid hybrid.

This plant appeared in Europe in the late 1990s and quickly spread among collectors. I too have had a specimen and I noticed that it has an extraordinary flowering capacity. Despite being only half a metre tall, it produced numerous large flowers. Two of them bore fruit. They contained some seeds immersed in a fragrant and tasty yellow aril.

The flowers of this hybrid are characterised by a large, dense corona spread across the petals and sepals, almost hiding them. Its colouring is less intense or contrasting than that of P. 'Byron Beauty'. In fact, it is white in the centre and strongly curled at the ends. It is light violet, almost blue in colour with alternating bands in its central part. The filaments tend to turn backwards, thus covering the white corolla.

The leaves are trilobate and have an intermediate shape between those of P. incarnata and those of P. edulis f. flavicarpa: the lobes are deep and the leaf margin slightly serrated.

As well as being generous, P. 'Tinalandia' is easy to grow thanks to its good character and adaptability. Its hardiness in the various Italian climates has not yet been tested. However, I do believe it could acclimatise in Liguria and in the southern regions. One of its parents, P. incarnata, is in fact very hardy.

However, propagated from cuttings it is an excellent pot plant, with stunningly unique and elegant flowering.