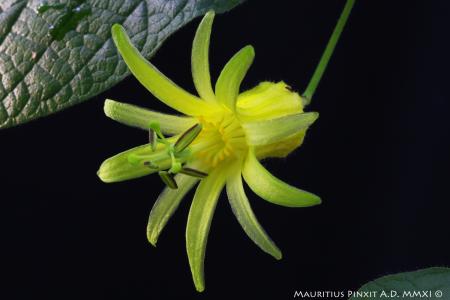 Denomination due to the color of the flowers, lemon yellow, in Latin citrus.

It is difficult to find passionflowers that bloom a deep yellow, making P. citrina a true rarity. It was recently discovered, being recorded in 1989 by MacDougal, a botanist and taxonomist who discovered it in the forests of the hills of Guatemala and Honduras. It was immediately successful, commercially too, as it was soon available in mail-order catalogues, from nurseries and offered as a house plant.

Easy to grow, its size is limited and it has a rich and abundant flowering all year round. Its beautiful foliage also contributes to its appeal. It is easy to propagate from cuttings, but it bears fruit with difficulty and only if it is artificially pollinated, using pollen from flowers, or better still, from different plants. It is more difficult to reproduce from seed and the results are uncertain. The rooted cuttings go into bloom without waiting too long and this is to be considered an additional benefit.

The whole plant is tomentose, from its pentagonal cross-sectioned stems to its leaves and fruits. In pots, it does not exceed much more than a metre but grows in a dense, branching manner. The large leaves, with the blade corrugated along the ribs, are bilobed with a slight hint of a third central lobe.

The flowers, completely yellow, with a diameter of only 4-5 cm, are formed by five sepals and five petals arranged in a perfect radial pattern. The corona is formed by a single series of erect filaments, of a deeper yellow and darker at the apices. The androgynophore column is also yellow with the only contrasting colour being the green of the ovary, filaments, anthers, and stigmas. The fruits, ovoid with six longitudinal ribs, are covered by a dense, light down.

In our climates, P. citrina is a pot plant. In winter, it is best to grow it at temperatures no lower than 10-12°C if you want to preserve it for the following year. It does not lend itself to being planted outdoors, except in the summer. Thanks to its limited size, however, it is easy to grow indoors by keeping it in a bright and warm position. It requires well-drained soil containing a slight percentage of sand.

I recommend it to beginners since its cultivation does not present particular problems and it gives much satisfaction.